It was the Worst of Gigs...And the Best of Gigs 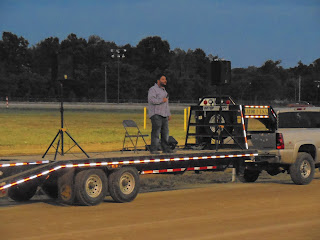 Last year I performed at the Marion County Fair. It was the worst gig I’ve ever done, and I have done some shitty gigs. I once performed at a Beef ‘O’Brady’s in Scottsburg, Indiana. I once performed at a prison in LeGrange, KY, where halfway through five inmates walked out (this was exceptionally upsetting to watch, as it quickly dawned on me that they were just going back to their cell).
I’ve done some shitty gigs, but this was by far the worse.
And it’s not that I didn’t know it was going to be bad, I just thought it was going to be fun bad. I imagined I would get there and find out I was opening for a pig. “First you’ll come up,” the booker would say, “warm them up a little, and then we’ll have Blue-Ribbon Betsy come out. She’ll do an hour…an hour fifteen…and then we’ll eat Blue Ribbon Betsy, then we’ll all go home.”
That’s what I imagined it would be like. But it was so much worse.
First, I get to the Fair. It’s a nice fair. Very quaint, Southern. There is a “performance artist” with a chainsaw carving planks of wood into faces of Confederate Generals; there is a booth where they serve deep-fried, doughnut burgers for people who are impatient to get a heart attack; there are rides that seem legitimately scary. I don’t mean fast, I mean unregulated. It was the first time I was terrified to go on a Ferris Wheel.
Also, there was harness racing. Harness racing is similar to regular horse racing except the horse is attached to a two-wheeled, wooden cart sat in by a morbidly obese man in sleeveless flannel. Like a white trash version of Gladiator.
There were 12 tired looking people on the bleachers watching this.
They weren’t betting on the horses. It was purely for the cruelty.
But the weird thing is no one was at the fair.
Like 30, 40 people tops.
So I asked the guy running the Event- an elderly gentleman in camouflage and a Sam-Elliot-thick moustache named Bill- where everyone was.
“Well,” Bill began in a Southern accent that bespoke years of worry and doom, “it’s been hard to get people to come to the fair over the years.”
“Why?”
“Bout 10 years ago…there was a tractor pull, and a pole flung out, went through a guy’s head in the bleachers, and out the back of his skull.”
“Jesus.”
“He didn’t die, but he’s never been the same since.”
“Jesus.”
“Two years later, one of the carts fell off the Ferris Wheel…That person died.” He scratched his moustache. “Ever since then, it’s been hard to get people to come to the fair. That’s why we had the comedy show tonight. We were hoping it would get people out. As you can see…that didn’t happen. But we’re still gonna have the show, but don’t bring up the guy with the pole, cause he’s here tonight, and he’s sensitive about it.”
“Where is the show even happening?”
He pointed to the race track. “Once the horses are done racing, we’re gonna drive a pick up truck up to the race track, and you’ll perform on the back of the truck to the people on the bleachers.”
I started to worry that this was going to go very badly. Performing on the back of a pick-up truck? I was a comedian, not George Wallace running for governor.
And also, there were only 12 people on the bleachers, and they were about 200 feet away from the race track. Even if they laughed hysterically at every joke, you wouldn’t be able to hear it. And contrary to how most comedy clubs are designed in this country, hearing laughter is crucial to a good show. Comedians are damaged people. They need to hear the laughter. They need the validation.
This was going to go very badly…

The show begins. First, Bill drives the pick up truck on to the race track and stands on the back of it.
“How yer all doin?” he asks.
I looked back at the 12 people on the bleachers. No response.
“Well before we begin, a couple quick announcements. Horse Number 4, Harriet, the one who crashed in the second race. I’m afraid we did have to put her down.”
Silence.
“With that out of the way, you ready for the comedy show?”
Silence.
“Our first comedian is…”
More silence. But this was a silence I had grown accustomed to my entire life. People- first teachers, then hosts at open mics- staring down at the name “Raanan Hershberg” trying to wrap their heads around this Jewy tongue-twister.
“Ladies and gentlemen,” he finally said. “Give it up for Ronald Harrington.”
Somehow, in a matter of seconds, he had managed to completely De-Jew my name.

“How’s it going?” I asked, after spending the last three minutes awkwardly scrambling on to the back of the pick up truck.
Nothing. Just breeze. I couldn’t even see the 12 people’s faces. I wasn’t even certain they were alive. Perhaps they were all the patrons who had died in freak accidents at the fair over the years- all placed in sitting positions on the bleachers. Just 12 Weekend-at-Bernie-Corpses staring blankly at me.
I had never been so far away from so few people before.
“Good to be here,” I said. And then I went into my set.
Not only was it silent, I couldn’t even make out their facial expressions. Some people can enjoy shows without laughing. Old, white men in particular. Not too keen on laughing. Laughter- they seem to say with their blank stares- that’s for black people and women.
But I couldn’t make out anything. After 10 minutes, I finally stopped.
“Look, I can’t do this,” I said to the 12 outlines 200 feet away from me. “Comedy is about interaction, it’s about communication. Not this. I need to know if you like these jokes. That’s part of it. It doesn’t matter that I’ve done these jokes a thousand times. It doesn’t matter. See…I hate myself. So I constantly need validation. I have a damaged Ego. That’s why I am standing on the back of a pick up truck on a race track in Marion County performing for 12 people two hundred feet away on bleachers. I need constant validation. Or I need to bomb. One or the other. But this- I don’t know what this is. I don’t even know if I’m doing badly. So here’s the deal…If I make a joke that you like, just raise your hand. Okay…Raise your hand now if you understand what I’m saying?”
The 12 people raised their hands.
So they’re alive. I know that at least. I took a breath, and said my next joke.
I don’t remember what the joke was, all I remember is the distinct image- now burned permanently into my brain- of no one raising their hands.
“Great…before it was a mystery, now I know I’m bombing.”
And just then…one outline, to the far right, sitting alone, raised their hand. Not completely up in the air, more of a half-raise- like the equivalent of a mild chuckle, or when someone says “That’s Funny” but they don’t laugh like a douchebag.
But it did something to me. It gave me the confidence to keep on going. I had made an interaction. I had made contact.
I did another joke. Two more people raised their hand. I did another joke. One more person raised their hand. I did another joke. 4 people raised their hands! 4 out of 12!
I was killing.
Finally, I got the end.
“Thank you so much,” I said to the 12 outlines two hundred feet away that I had finally learned how to communicate with. “I learned a lot tonight. I learned that my Ego is so damaged I don’t even need laughter to give it a boost. Any form of communication will do. I also learned that there will never be a time in my life where that void or whatever it is will be filled. I will always be looking for validation. From anyone. No matter the situation. I hope you enjoyed this thing I did. Or some of you enjoyed it at least. I hope some of you liked it…