Analysis of W.B. Yeats’ To A Child Dancing in the Wind 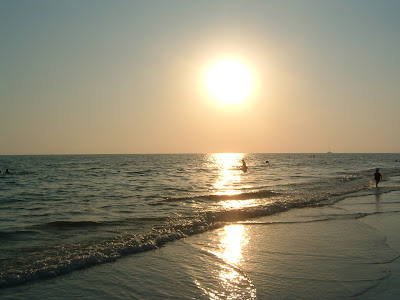 To a Child dancing in the Wind, 1916
Dance there upon the shore;
What need have you to care
For wind or water’s roar?
And tumble out your hair
That the salt drops have wet;
Being young you have not known
The fool’s triumph, nor yet
Love lost as soon as won,
Nor the best labourer dead
And all the sheaves to bind.
What need have you to dread
The monstrous crying of wind!
The success in which Yates creates a visceral reaction in his readers is due to his subtle manipulations of an otherwise strict adherence to form. By training the reader to be on the look out for certain patterns in his poems, the sudden variation from those patterns causes in the reader a feeling synonymous with disillusionment. But one must have illusions in order to be disillusioned, and Yeats' use of form is that illusion, carefully constructed only to be broken.
To a Child Dancing in the Wind is a good example of the ways he goes about breaking the patterns that he works so hard to construct:
On the surface, the poem is fairly straightforward: a girl dances on the shore, not hearing the ominous sounds in the incessant crash of waves, or the howling of the wind. But to the narrator of the poem, the wind or water’s roar alludes to the injustice at the core of nature: the constant defeat of noble passions in a world where only disorder remains triumphant. Love, the noblest of all forces, is lost as soon as won, while the fool triumphs (And who is the fool but someone not motivated by love?). In a similar vein, the best laborer is dead- he is the best because he too labored out of love- and “all the sheaves to bind.” A sheaf is a bundle of cut stalks of grain or similar plants bound with straw or twine. It’s deliberately vague, refusing to convey the image of a specific product untied, but rather the more abstract, all-encompassing notion of all things in nature fragmented. The following line alludes back to the wind, retroactively implanting in your head the image of the wind scattering the sheaves previously mentioned. This too is another victory for Uproar.
The poem captures the diverging impressions the concrete world makes on the young and old- the young is immersed happily in nature, while the old is kept at a distance, linking objects with symbols of injustice. It’s not hard to guess which one is happier, and the entire poem is infused with a melancholy tone. But what elevates this poem beyond a mere exercise in formalism is the subtle deviations from its meticulously constructed form. These deviations, or breaks, are quiet and gentle, the ominous whisper of entropy. In this poem, the break is in the number of syllables in each line, and the employment of slant rhymes (rhymes where either the vowels or consonants of stressed syllables are identical- known/one, bind/wind).
The first fives lines are all six syllables long, and then the sixth line, "Being young you have not known", is seven syllables. The pattern continues in the same manner- the next five lines are all six syllables long, and then the sixth and final line is seven syllables again. The additional syllable in the halfway mark creates a break in the poem, revealing that the poem is in fact made up of two halves (the first concrete, the second abstract) which are then synthesized in the last line.
The first five lines reference only concrete objects: the shore, wind, water, salt drops, hair. The seven syllables in the next line signal an intermission, followed by another five lines, this time dealing all with abstractions. The shore and wind are forgotten, replaced by 'fool's triumph' and 'love lost as soon as won' and 'all the sheaves to bind’. All images of the injustices in the world, but like the sheaves, nothing concrete to bind them too.
The final line of the poem- the monstrous crying of wind- synthesizes the concrete world in the first half with the abstract notions of injustice in the second half; the synthesizing of the abstract and concrete have now allowed nature to weep for the injustices of the world.
The other variation is in the rhyme pattern: Yeats uses two slant rhyming couplets in the poem: known/one, bind/wind. If he disregarded the rhymes altogether in these moments, the effect would be too jarring on the reader. But the use of slant rhymes suggests a quieter, assiduous effect- a straining but failed attempt at perfect form. The monstrous crying of the wind breaks the harmony created by the poem’s strict rhyme pattern. The wind has blown the rhyme away. And isn't rhyming something we associate with childhood- the calming affect of nursery rhymes.


Whatever subtle awareness of life’s disorder children attain is always assuaged by the nursery rhyme’s perfect meter. The first line is typically ominous, entropic- and if that mockingbird don’t sing- and in the second line the rhymed word signals a regaining of order- Mamma’s going to buy you a diamond ring. Everything is in its right place, the nursery rhyme suggests, so now you can go to sleep. But everything is not in its right place- the wind has blown things out of order. This is why the wind is monstrous- by refusing to follow the rhyme pattern it blows away our image of the harmonious word we perceive as a child- so perfectly embodied in that very rhyme pattern.
The poem is a metaphor for the creation of metaphors. It chronicles the birth of imagery, through our initial experience of the sensory world, to the abstract notions born from experience’s inevitable disillusionment, to the final linking of those ideas to nature. But more importantly, it links the ability to symbolize with age. In our youth, the waves and water are not linked to anything but themselves- the visceral power of the objects being far too strong to suggest anything but themselves. But as we get older, more and more we link nature with the ideas of life that begin to form in our minds, begging the question:  Is the metaphor an expression of our loneliness, or is our loneliness brought on by our ability to see things metaphorically, thus intellectually distancing ourselves from the sheer visceral power and excitement of objects?
Do we use metaphor because the objects around us have lost their power? A baby can be enthralled by keys dangling in front of him. The light reflected from the dangling keys is powerful enough on its own. But for adults who have grown weary of the sun, we are forced to rejuvenate our interest in the concrete by linking them to the abstract. The keys must symbolize something else if we are to be enthralled by them once again, symbolism being a poor attempt at recreating our youthful enthusiasm for the world around us. (And of course the closest attempt at recreating youth's enthusiasm for the sheer, visceral power of objects are hallucinogens, which return a sense of awe to objects without the aid of symbolism; someone on acid can be just as enthralled by dangling keys as a baby). But symbolism is not a return to youth, but a symptom of our irrevocable banishment from childhood- those happy highways where we went and cannot come again.
Posted by Raanan at 11:58 AM