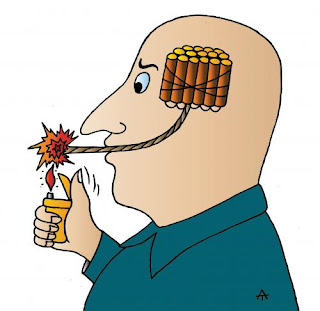 Not worth considering for too long
but I'll confess
when it comes to fantasies to help you get through the day
this one is the best.
A final decision in a life made up of so many indecisions
A firm direction in a life so full of second guesses
A journey, a decision, a statement
Going off book, missing your cue,
The fast forward button on a movie where the ending has already been ruined for you
Something hasty, something impetuous,
something alluring
Especially on a day
That isn’t just not exciting
But on days when excitement itself feels boring
A real incentive, a go getter, an Uplifter
The definition of a game changer
Growing tired of always changing
in a game that never does
Throwing away your heart after watching it
get handled
by someone who can’t love
The need to do something for once
That doesn’t get undone
The embodiment of giving up
A sigh to end all sighing
A lie to end all lying
A middle finger to all those posters about how you should never stop trying
Something to do on a rainy day
when the only board game in the house is monopoly and you already played it five times
today
Exercise for the lazy
The last work out
The last Yoga Class
The last bout
The last place where they still accept cash
The last waltz,
the last time you rent the Last Waltz,
The last midnight, the last dance, the last time you get cum on your pants,
The last time you miss the buss, the last kiss,
The last time you do anything else
The first time you’ll do this
The last time you’ll do it too
Something you know you won’t have any problem committing to
A resting place for the wandering Jew
Throwing the chessboard over
when you know the other player’s got you beat in five moves
Cutting the strings off the guitar where that guy in the Picasso painting is
forever playing the blues
Watching the future get crushed underneath the waves of the past
Leaving the track before you have to see your horse come in last
A change to end all changes
The last wind that uproots the last grain of wheat,
The missing puzzle piece in the puzzle you can’t ever seem to complete,
A choice in a life where you feel as if you haven’t chosen anything
Sometimes a good reason
Sometimes because you can’t see the forest from the trees where you’re screaming
Sleeping the whole day through
so you won’t have to wake up to another dream that doesn’t come true
The last thing to forget
The first thing you won’t regret
Cutting off your nose to spite your face
Throwing the baby out with the bath water
Moving back in with your mother and father
Looking at the sun after it becomes too blinding
Seeking death while death is still seeking the place
Where he still thinks you’re hiding
Dumping out the food before it spoils
Unshuffling this mortal coil
Lifting the world off the back of a turtle
Buying a one way ticket to the 7th Circle
Unwinding the clock, unlocking the wind
Unraveling the clouds, unknotting the sea
Losing everything you’ve ever found
To finally find out what losing really means
Freeing up your time
Clearing up your schedule
Giving away all the things you said
you’d give away in your will
A good exit line at a party that you’ve been dragged to against your will
And everyone there are people you’ve been forced to talk to
So you lock yourself in the bathroom
And you feel trapped- mentally, spiritually, metaphorically,
And also cause you just locked yourself in the bathroom
And you look in the mirror and never have you seen clearer
The bars of the cage that you’ve never not been looking through
And life is a dream someone else is dreaming for you
A roulette wheel that someone else placed money down on
for you
A sinking ship you never bought a ticket to
And there’s never been a place you’ve been that you weren’t dragged to
There’s never been a book you didn’t read because you had to
Someone you didn’t love because love forced it out of you
And just then
You remember
That you can leave this party anytime
And that, though it wasn’t your decision to attend,
It can be always be your decision to fast forward to the end
And if bailing casts a shadow on the party for the other guests,
Well sometimes it can be quite liberating to not give a shit.
To wedge the end into the middle of whatever thing it is
you’ve awoken to find yourself in
And suddenly, you can breathe again
And your face looks much brighter in the bathroom mirror
And that trapped feeling is no longer the expression you’re wearing
And the heavy luggage you were holding you realize is no longer that heavy
or maybe it’s that you’re not holding it any longer
And you smile to yourself
And go back and join the party.
Posted by Raanan at 6:04 PM