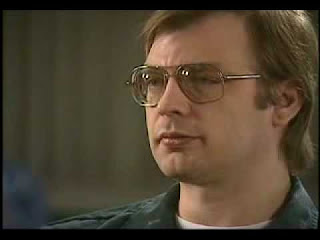 Jeffrey Dahmer is my name and this is my song
I killed a lot of people, I knew that it was wrong
I was a monster, I was evil, I was lonely, I was sick
The Universe that bore me played a dirty rotten trick
Born in Wisconsin right outside of Milwaukee
And if loneliness were waves I guess my soul would be the sea
As a kid I was withdrawn from the people that I’d meet
My youth was spent hearing echoes of monsters at my feet
By eighteen I was drinking hard to keep the thoughts from breaking through
But the things you try and run from you’re really just running to
I picked up a hitchhiker one day when my Dad was out of town
We went back to my place to drink some beers and wind down
We got into a fight that I can hardly remember
He wanted to leave, and I wanted him to stay forever
In my thirties I moved into a place that would live in infamy
I brought back many men no one ever again did see
And after I killed them, I kept the bodies around
To have someone to talk to when I was feeling down
When a victim finally escaped, the cops came knocking on my door
I tried to play it straight but it was time to pay the score
When one of the men opened the fridge he let out a frightful gasp
I had kept many souvenirs from my long, lonesome past
In prison I was sent pamphlets from my sad and aging father
About a man who knew how to stand upon the surface of the water
They say this man could forgive any sin, but this gave me little hope
When it came to my crimes, I really pushed the envelope
I was baptized in ’93 so that my soul would not be lost
The water cleansed my body but did nothing for my thoughts
And then one day in the weight room after being checked for lice
I was beaten to death by an inmate who went by the nickname Christ
I was cremated that November, they scattered my remains
My apartment was torn down, and my brother changed his name